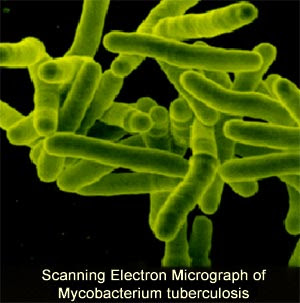 Tuberculosis has been a problem for mankind for at least 7000 years. From Neolithic man and Egyptian times, Tuberculosis has caused people to slowly waste away. Before antibiotics were invented, people were sent away to sanotoriums. These were places isolated from the general population where infected patients would get plenty of fresh air and good nutrition, thought to be the best treatment at the time. With the advent of antibiotics, man found a new lease on his struggle with tuberculosis. He is now finding out how tenuous his hold on that lease is. Newly evolved strains of TB are proving resistant to once common therapy and are causing new treatments to be sought.

Tuberculosis is a gram positive bacteria that is spread among humans through the air. It is especially a problem in enclosed spaces , such as jails, homeless shelters, dormitories, etc. Once contracted, tuberculosis may lie dormant for quite some time, which is called latent TB. Latent TB is non-transmittable, and can persist as such for many years. During this time it may be treated with oral antibiotics for a duration of four to nine months. Once the tuberculosis infection becomes active it is spread by airborne transmission of the bacteria in droplets of phlegm, mucous, and saliva. At this point the infection is fairly contagious and is often spread in enclosed environments like cafeterias, jails, homeless shelters, and airplanes. With an active tuberculosis experiences night sweats and fevers, a persistent cough, hemoptysis (coughing up blood), and poor appetite. If the infection is discovered, a person may be treated in a hospital. They are isolated in a negative pressure room where unexposed air is constantly drawn into the room and expelled through a filter sufficient to remove the bacteria. Health care workers must wear a fitted N-95 mask that also filters the bacteria. The tuberculosis infection is then treated with intravenous antibiotics . Three or more antibiotics are used to treat tuberculosis as it develops a resistance to a single antibiotic when it is used alone. Three or more antibiotics create a greater chance that all of the tuberculosis bacteria within the body will be killed in a short period of time before they are able to mutate and develop resistance.